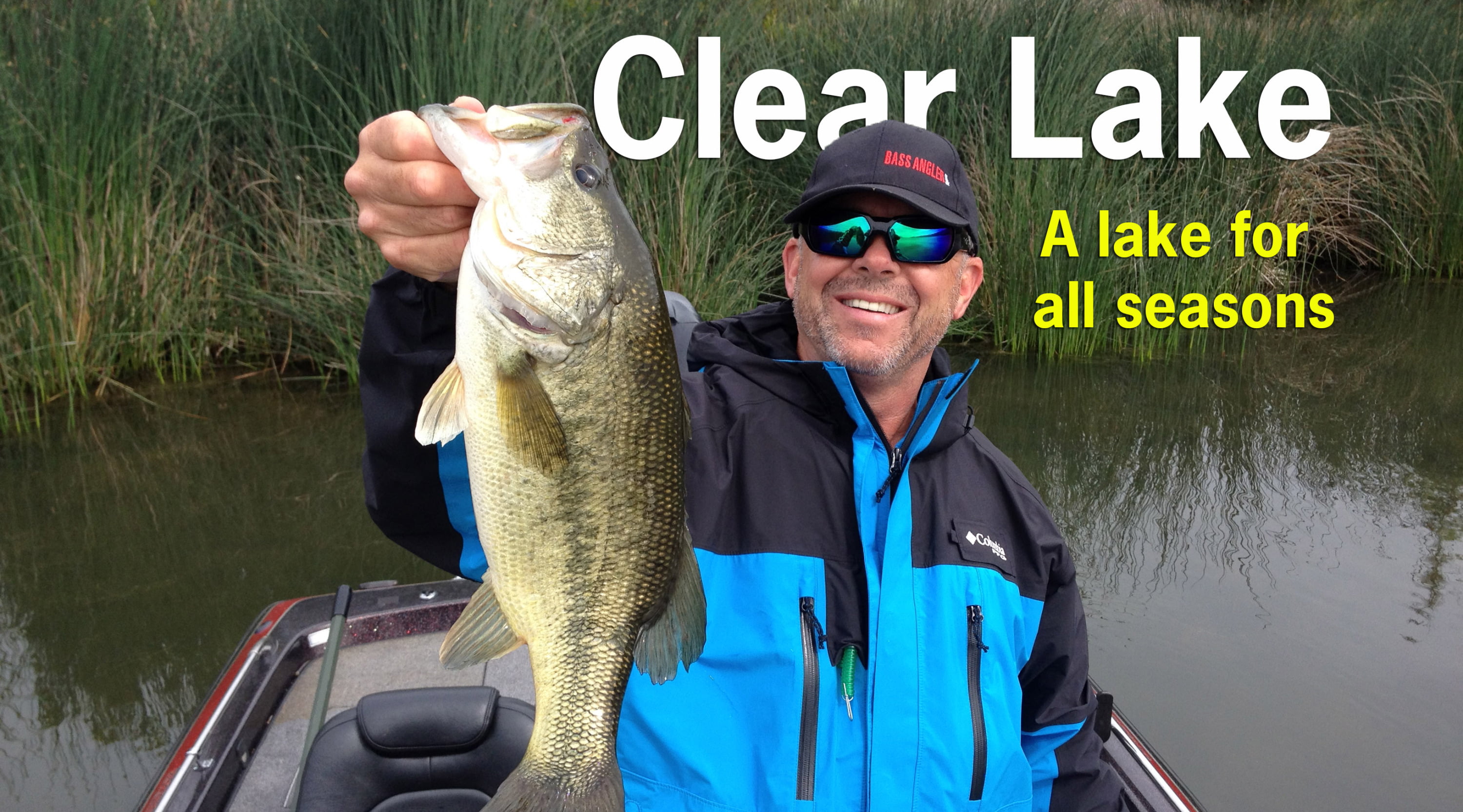 There’s a reason so many bass anglers consider Clear Lake to be their favorite water no matter the season, because it consistently kicks out quality fish. Its attraction however, goes beyond numbers in the livewell. This is lake, which on any given day, could produce the fish of a lifetime. Springtime is legendary for its swimbait-chewin’ hawgs. The summertime topwater and dropshot bites can be nothing short of phenomenal. Fall can turn into a crankbait/spinnerbait slugfest. And even during the dead of winter, the jig and ripbait bites can turn red-hot.

Clear Lake is also a place that, more often than not, will match up with your strong suit. Like to power fish? Swimbaits, crankbaits, ripbaits – they can all shine on this lake. You’re a topwater fanatic? Summer and fall, buzzbaits and Spooks can by dynamite, and the post-spawn frog bite can be, quite literally, explosive. You like the short game of flippin’ and pitchin’? You could spend a season working docks, tulles and wood and never run out of options. There is deep structure for the finesse angler and rock piles for the jig specialist.

Mike Reynolds, the 5-time Bassmaster Classic qualifier from Modesto, CA, has fished all over the country. He still feels that Clear Lake is the #1 bass spot in the nation. “The Delta might be better for big bass, and Guntersville and Champlain are both great lakes. But day in and day out, Clear Lake has more 4-lb’ers than any lake I’ve ever seen.”

If you’re a follower of bass tournaments, you’re already familiar with some of the astonishing results: in March 2005, with a 4-fish limit in effect, Sieg Taylor weighed-in 94 lb 11 oz for 16 bass to win the FLW Everstart event. Then the BASS Elite show rolled into town in late March – early April of 2007 and Steve Kennedy shattered records with 20 fish weighing an eye-popping 122 lbs 14 oz. And although Kennedy’s win came largely on the backs of swimbaits, Taylor won primarily by ripping Lucky Craft LV 500’s off the bottom, highlighting the diversity of presentations that can be rewarded at Clear Lake.

Lake County has maintained a relaxed, rural flavor, and a trip there can take you back to a different time in California. If you want to bring the entire family, there’s plenty for everyone to do. Swimming and water skiing are naturals. Bird watching is also popular with vast numbers of mallards, Western grebes, coots, geese, osprey, plovers, cormorants and mergansers on the lake’s waters and along its shorelines. For the history buff, this is an area that was once the stomping grounds of the stage robber, Black Bart, the scene of a battle with Native Americans at Bloody Island, and a training ground for the old-time pugilist, John L. Sullivan. There’s a water-park near the town of Clearlake-Outrageous Waters, with slides and rafting. And for something completely different, you can take an excursion to nearby Middletown to catch a tour of the Calpine geothermal field known as “The Geysers.”

At over 43,000 acres and with more than 100 miles of shoreline, Clear Lake has a wide variety of water for the bass angler to explore. In fact, many divide it into three, distinct sections: the north end, south end, and Rattlesnake arm. Lakeport is the center of the lake’s north section. There are rock piles, but its main features are tulles, weed mats, docks – and sloughs feeding into the lake renowned for their habit of attracting lunkers during the springtime. Native hitch move into these sloughs to spawn and giant bass are often there to greet them. Hitch seem almost remarkably inept at avoiding predation as they lazily fin along the upper section of the water column on warm spring days. Maybe this ancient species just never bothered to adapt to newcomers, such as the Pomos who appeared around 8,000 years ago and began harvesting them, or in the last century, largemouth bass, who have found them to be protein-rich meals.

The north end sports many of the lake’s most famous community-holes. We’re talking about the mouth of Rodman Slough, Rocky and Long Tule Points, Corinthian Bay with its entrance to Shirley Slough, Quercus Point and nearby State Park, the docks of Nice (neese) and Lucerne and “Swimbait Corner” at the lake’s northwestern extremity.

Lots of huge fish are caught and many tournaments are won, on the north end. Yet a substantial number of anglers, the afore-mentioned Mike Reynolds among them, still favor the south end. It’s focus of activity is the town of Clearlake and the launch ramp at Redbud. From there, you can quickly venture to the nearby steep, rocky shorelines that have produced so many winning fish. Places like Jago Bay, Fraser Point, Bass Alley, “The Pipeline,” and the Boatworks are all well worth the visit. And if flipping is your game, a short hop into Cache Creek can set your heart racing with its lay downs and thick, shoreline brush.

Last but far from least is the Rattlesnake arm of the lake, so termed for one of its most prominent features, Rattlesnake Island. Rock piles are often the name of the game here, and the skilled dropshot or jig angler can many times enjoy a field day in these environs. On the western side, opposite this arm, are other famed locales including Henderson Point, Shag Rock and Soda Bay.

These are a smattering of the many hotspots to be found on this body of water, one of the oldest in North America but still one of its most productive. It also has hospitable places to stay, hotels, rental homes, condos, and campgrounds, many with berths for your boat. Some that are worth checking out include Lake Haven Place in Clear Lake Oaks 800-998-0106, the Mallard House, Skylark Shores and Konocti Vista Casino Resort and Marina near Lakeport, the Best Western and Travel Lodge in the town of Clearlake and the Konocti Harbor Resort and Spa along the lake’s mid-section. If you prefer camping, Clear Lake State Park offers clean, spacious RV parking and tent locations, hot showers, and Wi-Fi service within 150-200 feet of its Visitor Center. You can read more about lodging and restaurants at www.lakecounty.com.

Another attractive feature of Clear Lake is that despite its status as one of the nation’s premier bass fisheries, it is still quite accessible from major cities. From San Francisco, it takes about 2 ½ hours to get to the 6th Street launch ramp in Lakeport. Go north on Highway 101, then travel east on either 20 (a better call if you’re towing a boat) or 175. From Sacramento, it takes about 2 hours to reach the Redbud launch ramp by heading north on I-5, then going west on 20.

No discussion of Clear Lake would be complete without mention of the incredible summer bite that has been happening over the last several years. If you’ve ever wanted to introduce a child or non-fishing friend to the excitement of bass fishing, this is about as close to a “sure thing” as you’re ever going to find outside of farm ponds or pay lakes. Drop- or split-shotting the shallows off points or along shady docks, especially from the midlake section south, can produce one bass after another.

If you want to chat with some local experts, stop by Limit Out Bait & Tackle in Clearlake Oaks (707) 998-1006 or Clear Lake Outdoors in Lakeport (707) 262-5852. All these shops have terrific selections of popular baits and knowledgeable staffs that will help you pick gear that best matches your style of fishing.