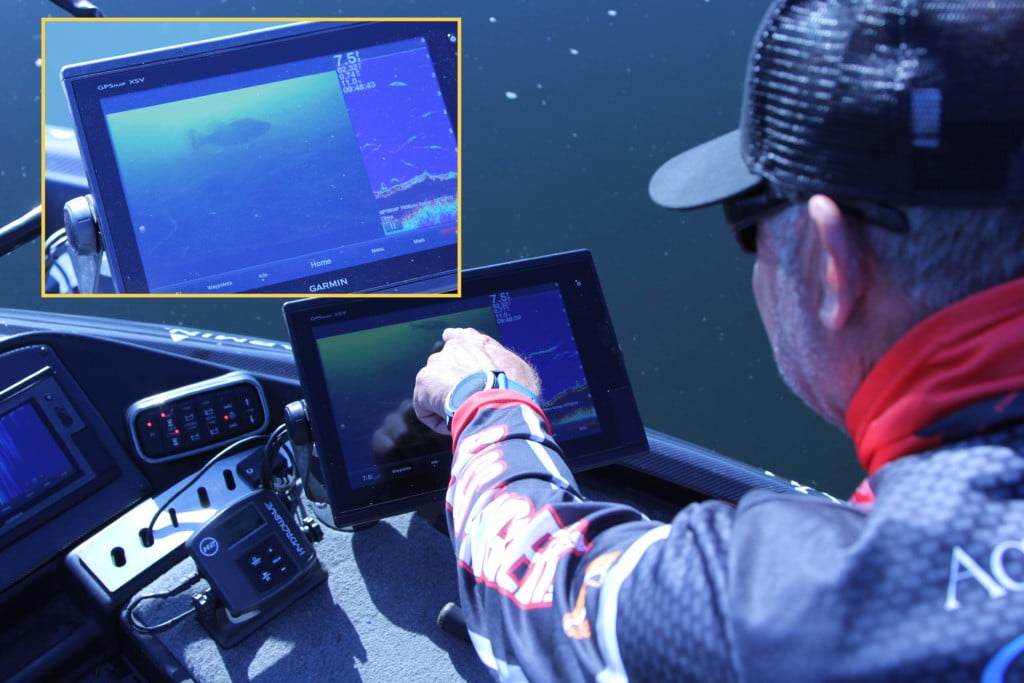 Saturday morning, mid-November and it’s a beautiful day. Cold but bright blue skies with puffy cumulus clouds and barely a breeze. You’re now on your fifth spot and haven’t gotten a bite!

I’ve tried spinnerbaits, crankbaits, jigs, jerkbaits, even a drop shot and Senkos , and I can’t get bit. Last weekend I caught 20 fish!

Post front bass is what’s going on. The weather’s nice now, but last week it was storming.

Unless you’re a bass you won’t ever know exactly why it is—whether it’s high pressure, pre-frontal gorging, sunlight or some other reason—but fall bass fishing gets tough after a front rolls through.

Before and during the front largemouth and spotted bass generally move shallow and feed. Shallow is a relative term and depends on the lake you’re fishing. If the fish were in 50 feet they may now be in 20 feet, or if they were in 20 feet they might now be on the bank.

The day after the front, even with high pressure and blue bird skies, the bite is usually fair. Not quite as good as pre-frontal conditions, but you can usually get a good number of fish.

The second day after the front is usually the toughest day. It’s as if someone flipped a switch and shut off the bite. If you get a bite, it’s usually an unnoticeable tap and they’ve spit out the bait before you can set the hook.

Things start to return to normal on the third day after a front.

For many of us, we don’t get to choose the days we can get out to fish.  It seems that the only time we can get out fishing is on the weekend during post-frontal conditions, and many times it’s the second day when fishing is the toughest. So, let’s see what we can do to improve our odds.

Think about it… when you’re driving down the street, where does traffic stop or become congested? Almost every time it’s in an intersection, and the same holds true in lakes. It’s like this: the fish commute just like us, going from one place to the next. Only their home is mobile, meaning they’re like snowbirds living where it best suits them for the season. In the winter time Arizona and Florida are more congested than Minnesota, similar to how main lake points are better than shallow flats.

So now you know we’re looking for major intersections like main lake points. But there’s a ton of them, so where to start?

I’m looking for two types of points: major points and points leading into a cover or creek. Major points are those big long points that extend out into the lake; the points going into a creek or a cove are pretty obvious.

These two types of points are what I call high percentage places. Yes, these are not the only places that have fish. Road beds, ledges, offshore humps can all have fish, but these points are a good bet 75% of the time.

Hopefully, you have good electronics. I use Garmin EchoMap Ultra and LiveScope so I can see the depth with the most activity. Scan the point shallow-to-deep in order to locate the fish, then you’ll have a starting point. Check each point thoroughly, as fish can be at different depths on different points. Don’t be afraid to look deep, too. I’ll look out in 40, 50, sometimes 60 feet to see if that’s the deal for the day.

Often times, once I locate some activity, I’ll lower my AquaVu to be sure the fish I’m seeing are bass. I’ll also confirm what type of cover there is, and how far off the bottom they might be.

Well, after tossing the kitchen sink at the fish with no luck, we’ll need to change up. It sure is nice to toss a spinnerbait down the bank or hop a jig off a bluff wall, but not today—this is post front fishing.

This story was spurred by a post front Saturday bass club tournament during which I caught 17lbs. No one else caught more than a couple bass.

Slow down and stay in the high percentage places—it’s just that simple.

Once you find a good point and the depth that seems to hold fish, work it slow. Start shallow, ten feet or so shallower than where you’re marking fish. Drag your bait down through them to about ten feet deeper than where the fish were marked. Start on the tip of the point with the boat out deep and make a couple of casts to the point. Go off to the side of the point and make a few casts, then work the other side before going shallow and dragging your bait uphill. Try this on a few points until you get bit and then work to duplicate it. Keep the bait in contact with the bottom. Use the lightest weight possible as this will help you fish slower.

What I prefer in this situation is a bait that I can fish slow and on the bottom. I like a four inch or smaller worm on a drop shot, a wacky-rigged five inch Senko with a nail weight, a six inch worm on a shaky head, or a Carolina-rigged Brush Hog or Yamamoto Spider Grub.

Next time you’re out during post frontal conditions and the fishing is super tough, keep it simple. Slow down and stay in high percentage places.

If you enjoyed this article, subscribe to Bass Angler Magazine, ($5 discount included) the publication designed to help you catch more bass every time you go out.