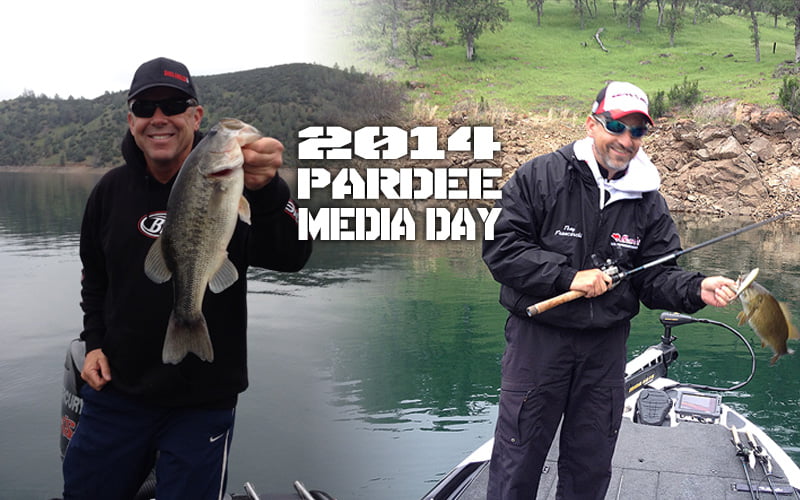 Bass fishing is all about decisions, make the right one and you’re a hero, the wrong one a zero.

What was the decision you made last time you went fishing? Was it right, wrong or somewhere in between? Most importantly what did you learn from your outing?

On April 13th Ultimate Bass Radio  / Kent Brown put on a media event at Pardee Lake in Northern California. The event started at the coffee shop with a nice breakfast and cool bag of goodies provided by Strike King.

The event this year was a who’s – who with anglers like the legend Dave Gliebe, Jimmy Reese, Greg Gutierrez, Ken Mah, Jason Borfka and several other great pros.

Every media event is different and this is one where the media people get to fish (the best kind). There are two segments where a media person goes with one angler for a few hours, comes back shoots images, has a snack then switches to another pro for the second half.

These events, as media you’re at the mercy of the pro to get some nice bass and pictures to use for your magazine or website.

My first segment was with an old friend and great angler Tony Franceschi. We start talking about decisions where to go and what to fish. Tony hadn’t fished Lake Pardee in two years and didn’t have any inside information, only going on what he learned two years ago and his instinct for the time of year and the type of lake.

The water temp was 62 to 64 degrees, the water is very clear with visibility to 10 ft. and this morning was overcast.

Tony said we’re running up the river to check some coves, the water is warm and the fish should be pretty active.  Running his new 21ft BassCat near 75 MPH we run up river four or five miles stopping in a cove that receives a lot of sun.

Why is sun important?  The lake has just warmed up to the low 60’s and the bass should be in spawn mode where sunny banks are more apt to have a bigger population of spawning bass.

It’s  overcast with a little wind so Tony wisely opts for a topwater River2sea Rover walking bait.  Using a bait like this will appeal to bass in several stages. Bass that are moving up, spawning bass and post spawn bass will all hit a topwater bait. It’s not like every bass will hit it but it is a high percentage bait for quality fish. I was also throwing a topwater bait at the same time except I was using a Whopper Plopper also by River2sea; we tossed these baits up and down the bank for about an hour with no takers.

What next? Keep going down the bank fishing the same type bank with the same baits. No results means, it is time for change. Change baits or change areas just don’t keep doing what’s not working. 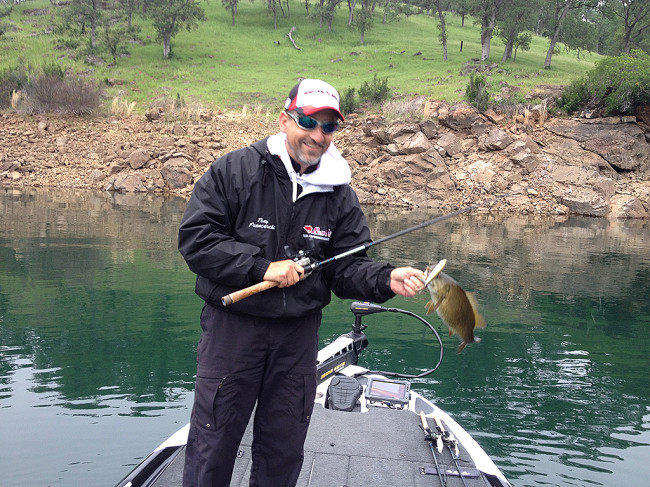 Tony heads to a new similar cove, then heading into a small cove he get’s one, a two-pound plus smallie with a bunch of others following close behind. Slowing down there, we toss different baits, a Senko, small hair jig and a drop shot but the followers just didn’t want to bite.

We continued on for another 10 minutes finding a tree had fallen into the water, perfect spot for a bass. I toss a Strike King jerkbait (one we got in the goody bag) to the tree and three bass follow it out, one hits it but doesn’t get hooked. I switch up to a small hair jig and land a little largemouth. A few yards down the bank we find another tree where Tony tosses a Senko and I watch a bass travel 10 feet to eat it, Tony lands that one, little one too. Going past the tree we head down the bank close to the main lake and I get one on the jerkbait, small one in a small cove right across a point.

After a few fish we’re now starting to get a grip to what the fish are doing.  Each fish was on a piece of cover or in a small cove.

All of these fish were small so Tony heads across the lake to see if we can expand on what we found and locate some bigger bass. We are looking for areas with a little cut and some cover.  Heading down the bank Tony is still using the walking bait and I’ve switch up to a small Senko that I can pull off the cover into slightly deeper water using something totally different.

Tony is looking for quality fish that are willing to commit to the top water, me, my presentation I believe will appeal to all size fish.

Working in and out of several small coves off the main lake Tony get’s a bite and it misses the bait. Working the same area I get a fish, a small one maybe 12 inches. This goes on for the same way for about an hour – they are hitting the top water but not getting hooked.

While continuing down the bank we head around a main lake point, I get three quick fish and I say to Tony “aren’t you going to throw your Senko too”? Tony subsides to the pressure and picks one up too and fishes it for a bit. 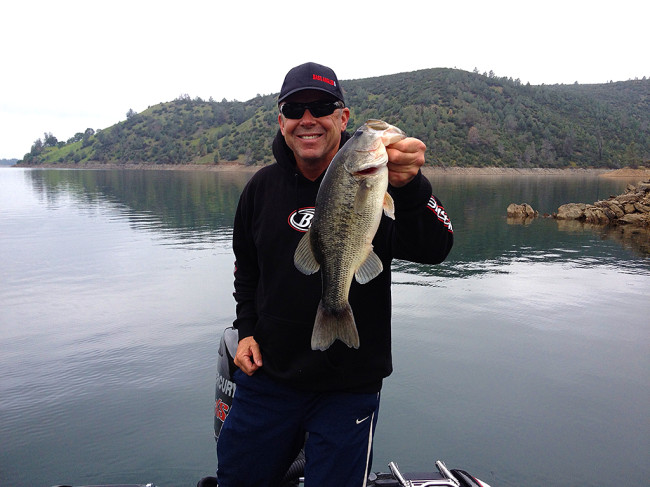 I toss my Senko behind the boat in 60ft of water and just let it flutter down weightless – about a minute or two later one almost four pounder whacks it.  Cool we finally get a decent fish in the boat.  Tony turns the boat around and goes over the point again where we both get a couple more fish but no good ones.

It’s almost time to go in but Tony see another spot similar to the main lake point, cranking up the trolling motor he heads over. Tony casts to the edge of the point and wham a giant bass grabs his Rover (top water) and starts pulling hard – looks like it’s well over 5 pounds, fighting it back to the boat it comes off and it’s time to head back.

Bass fishing is a sport where 95% of the time you can’t see what your opponent is doing or if he/she is really there.  Even the best anglers won’t catch um every day but whether they do or not they learn and make mental notes to make a change for the next time.

What did we learn today?

Though conditions seemed perfect for the walking top water bait the fish just didn’t commit – if this happened again a smaller popper type bait might have worked.

The fish were eating the Senko but (except for one) they were not a tournament quality fish.  I believe the Senko could have played a key roll in catching quality fish and to do it again, running main lake points may have been the key although I think there would be a number of smaller fish caught at the same time.

Stay tuned as we hook up with Dave Gliebe for the second half of the story.