Stockton Fishing Examiner by Jody Only

The sunny days and warmer ways of this past weekend’s Delta forecast wasn’t enough to sway the big bass in the way of the anglers fishing the final stop in the West Coast Bass Pro Am on the California Delta.

Only one boat bagged over twenty pounds both days of the tournament. With 25 plus on Saturday and over 21 on Sunday, pro boater Charlie Dillard boasted 47.60 for his total tournament weight and first place pro prize and plaque.

The first day of the event ended with only 3 boats bringin’ in bags with over twenty pounds.

That first day of weigh in wound down with pro Dave Erwin and Am Chris Ricci partnering a pair of bookend bass that saw the scale score at nearly 16 lbs for the two big fish of the day. Erwin’s 8.10 and Ricci’s 7.86 were the foundation of their limit and both brought aboard on a Senko. Ricci giving credit to the Rev Rig on his.

Sunday’s sun slipped behind the clouds, and the anglers raced out of Russo’s to run the river in search of the secret to success.

Again seemingly seeking the Senko, the big bass bit for those that dropped one in the right place.

Zack MacDonald, the youngest WCB angler at 16 years old and 2nd day Am draw of first place pro Charlie Dillard found that right place to put a green pumpkin on a plate and serve his Senko to a hungry 7.44.  Zack’s big bass helped beef up that 2nd day sack to 21.82 and keep Charlie in first.

Zack’s big one wasn’t enough to hold for Mega Big Fish on Day 2, as JR Taylor had a sack of Senko’s at his side and after seeing his scale tipper on the same spot both days, he set his Senko in sight of a 7.98 that couldn’t resist.

JR’s Senko was enough to earn him a 2nd in the big fish payday, but that’s not the end of the Senko saga.

Loading the limit of Sal Herrera was the 8.11 that sought out the Senko at the end his line on the final fishing day. That 8.11 was just enough to edge out Erwin, the Air Force Angler by one single ounce in the chase for the check of the Mega Big Fish Pool.

Lots of fish were weighed, lots of baits were thrown, some were bit … some were even bit often, but if you wanted to cash a big fish check this weekend in the West Coast Bass Pro Am on the California Delta, you had better have had a sack of Senkos somewhere on the boat.

Rounding out the Top of the Tournament:

Both boasting enough weight to  “beat the pro staff”, Ed Ackerman, Boater bagged a new baitcaster and Jon Bradford, Non Boater had a prize pick-up of a new spinning reel compliments of U.S. Reel for finishing one place ahead of U.S. Reel Pro Staff, Mark Lassagne.

Big Bass Brag Board Below:

Pro Boater, Rick Rudd followed his 2nd place finish in February from the first Delta tournament with a 6th place spot in this one.

Bret Leber shows off the big fish of his 31 pound tournament. 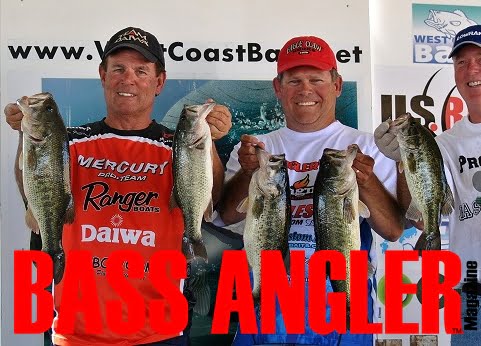 Steve’s second day with Joey Letsinger also proved productive and set Steve in 8th overall on the Co side, with his nearly 34 pound tournament total.

Even after weighing in only 10 lbs on Day1, Rich Smith’s persistance paid off, returning to his water on Day. His weight more than doubled and placed him at 9th on the Pro side, with over 32 lbs.

Nick Welton came off a catch that earned him Mega Big Fish prize at the last Delta stop and followed that up with 8th in the Pros, for the return to the Delta.

This May event on the California Delta concludes the 2010 West Coast Bass Pro Am tournament series. The circuit will return to Lake Shasta in October for the West Coast Bass Classic-Tournament of Champions. Angler and Co Angler Year to Date Standings and Classic Qualifiers are available at the WCB website.

The Delta tournament coverage will air on Angler West TV on Sunday morning on Comcast Sportsnet California.  Check local listings.  This event is also available on DVD from the Angler West TV website.

A Super Teams tournament will be held on Clear Lake August 27.  Partners sign up together and fish together. There are still spots available contact Larry Viviano for sign ups.

Results available for the March 2010 Pro Am Circuit 2nd stop on the California Delta.

Results available for the April 2010 Pro Am road trip to Shasta.

Look for full coverage of the West Coast Bass events in the Bass Angler’s Guide.