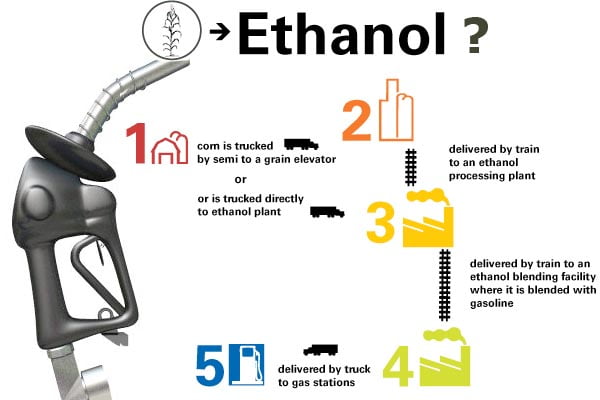 E10 is a gasoline blended with up to 10 % ethanol alcohol and is now in widespread use in the U.S. Working its way into gas tanks for several years, E10 is wreaking havoc on boat engines. Ethanol or ethyl alcohol is made from corn, sugar and other grains. Ethanol is an excellent cleaner, solvent, anti-freeze but importantly, ethanol is hygroscopic meaning it will absorb water.

Absorbing 10 times more water than regular gasoline, when ethanol can no longer absorb water, it will phase separate from the gasoline, the water soaked ethanol will settle to the bottom of the tank which is where the engine’s fuel pick-up is located. Many boats sit with fuel in their tanks for weeks, even months, allowing ethanol to absorb water or go through phase separation. In either case, this situation can create performance problems and cause serious damage to your motor.

Once the fuel and water separates the trouble begins. A water-separating filter isn’t the ultimate solution to this but it is part of the system to protect your engine.  These separator/filters trap small amounts of water allowing only fuel to pass, however once ethanol separation occurs, these filters can’t protect your engine. Additionally, ethanol can dissolve some solid materials like varnish and even oxidized metal in steel and aluminum tanks. The use of 10-micron fuel/water separators traps these contaminants.

First and foremost, once ethanol has phase separated, there’s no bringing it back.  There are ads falsely claiming their new products can fix or repair water-contaminated fuel. Fuel additives have many benefits and should be used when storing a boat for winter, but no additive turn water into fuel. The only solution to phase-separated gas is to have a professional drain the tank and start with fresh gas. It’s unsafe to run on contaminated fuel. You should purchase fuel from someone you trust and who sells a lot of gas. Keeping the gas moving reduces the likelihood of getting wet gas that has separated or picked up debris from holding tanks. We are still learning about ethanol. Marine manufactures formerly instructed boaters to avoid all ethanol, but now consider 10% ethanol to be acceptable. Using over 10 % alcohol gas is dangerous and it negates most marine engine warranties. Trouble could be on the horizon as 15% ethanol is being considered and there’s universal agreement that this will cause motor damage and create performance issues with gas powered engines.

While wintering or storing your motor, it’s always recommended to keep your tanks full. There isn’t a significant loss of octane and a near-empty tank creates an evaporation chamber allowing water to collect in your tank as temperature fluctuations create condensation. This occurs more in boats than cars as vented boat tanks are more likely breath in moist air. If the tank is almost empty over the winter there will be less E-10 in the tank to absorb moisture. The combination of condensation and less absorption greatly increases the chances of phase separation. Phase-separated ethanol will remain separated at the bottom of the tank to eventually clog carburetors, gum-up injectors, deteriorate hoses and parts, potentially creating thousands of dollars in damage.

Outboard manufacturer Yamaha suggests a series of precautions. They’ve created stabilizers to help prevent gas from separating and specialized gas treatments to dissolve additives before they can build up while adding a coating to protect engine parts from the corrosive ingredients in ethanol.

Fortunately, outboard engines which are 5 years old or newer have been designed to be more compatible with alcohol fuels. Still, boats are more likely to have ethanol problems because, unlike cars, gasoline sits in boats for extended periods of time increasing the possibility of water-contamination/phase separation. Many marine engine breakdowns are directly related to the mismanagement of E10 gas and even though your marine mechanic may not suspect fuel as a possible cause. Older engines were constructed without today’s materials and technology and were not designed to withstand the damaging effects of ethanol. Engines built prior to 1992 have plastic and rubber parts and fiberglass tanks that are not compatible with E10 alcohol fuel.  During the 1980s, many rubber fuel system components were developed to withstand exposure to fuels containing ethanol. If older, it might be prudent to replace such parts with newer ethanol-safe components before using fuels containing ethanol. Manufacturers can tell if you need to make these upgrades. However, it’s still a good idea to frequently inspect the fuel-system components for signs of swelling or deterioration, replacing and repairing if problems are noted.

When storing a boat for two months or more, it’s best to completely remove all fuel from the tank. If this is not practical, maintaining a full tank of fuel along with a fuel stabilizer will provide fuel stability and corrosion protection. It’s best to add stabilizer and/or fuel treatment to the tank at the recommended dosage, and then run the engine for 10 minutes to allow the system to be cleaned, then shut the fuel valve to stop the fuel supply and allow the engine to run until it stops.  Top off the tank to reduce condensation. Don’t cap tank vents and don’t fill to overflowing. A little extra space allows for fuel expansion and contraction with temperature changes.

Remember, prevention is your best weapon against serious and costly repairs created by ethanol gas. For more information including free downloadable winterizing checklists, go to www.BoatUS.com/winter