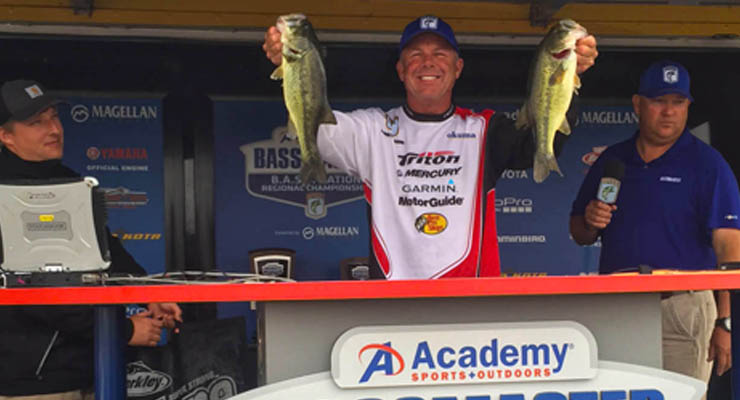 Wire-to-Wire Victory for Lassagne at the B.A.S.S. State Championship

Weighing limits of 13-10, 11-10 and 12-4 at the B.A.S.S. Nation Regional Championship, Mark Lassagne from San Ramon, Calif. On the final day edged out Rod Brown and Jason Hemminger as the California State Boater champion advancing to the B.A.S.S. Nation Nationals. Lassagne also earned the A.R.E. Top Angler award of $250 as the top-finisher, using the brand’s truck caps.

Lassagne stated he had one goal this week, which was to win his state and advance to the Nationals for a shot to compete at the 2017 Bassmaster Classic. He added that he was very proud of his travel partner Michael Coleman who earned the non-boater championship for California. They will both be traveling back to the national event together.

“The practice session at Lake Mead started out tough,” said Lassagne. “I only landed a few fish each day, but those few fish gave me the confidence to expand on what little I found.”

The key was fishing into the fish rather than what’s happening right now. So many times we fish the fish that are biting right now, but are moving away from that pattern. Lassagne figured with the nice weather the fish would be on the move to spawn, but he knew most anglers would be targeting the usual spawning places. With that in mind he decided to look for the out of the way spots, those subtle places that others wouldn’t look. Each day after boating a limit, he had to search for new water for the next day as each of his spots only held a fish or two.

“I found all of my spots using my 1040XS Garmin,” he stated. “The depth shading option on the Garmin was the key. Since the lake was over a 100 ft down, the normal mapping would show the coves going way back but with the depth shading you could see exactly where each cove ended.”

Lassagne’s fish were caught in less than 2 ft of water on a 5 inch, green pumpkin Yamamoto Senko.

The western pro had his plastic wacky-rigged on a Gamakatsu #2 dropshot hook with 10 lb braid married to 8 lb Sunline fluorocarbon spooled on a 7 ft, medium-action Okuma Helios spinning rod and a 2500 Helios spinning reel.

“The Helios set up played an important role in my success as I needed a sensitive rod and a reel that could make a long cast,” added Lassagne. “I would position the boat about 30 yds. from the back of a cove and cast the open-hook Senko on to the bank. I would drag it in the water to about a foot deep, wait for about 30 seconds, make another cast and then head to the next cove.”