Roseville, CA – January 7, 2010 – West Coast Bass announced today that it will offer a custom Harley Davidson as first place prize at its kick-off event for 2010.

West Coast Bass, the premier televised bass fishing pro-am tournament circuit in the western United States, is serious about attracting new anglers. The Harley is part of its commitment to show fisherman nationwide that West Coast Bass is back “bigger and better” than ever!

“Exciting prizes such as the fantastic collector’s edition Harley, along with well-run events, will attract the best fishermen,” advises Larry Viviano, c 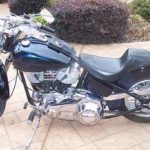 o-owner of West Coast Bass. “We know what fishermen want – great prizes, good times along with exposure for themselves and their sponsors.”

West Coast Bass has acquired permits for the premier California lakes at the best times of the year, starting with the season opener at Clear Lake, February 27-28, 2010. West Coast Bass events will be filmed and featured as half-hour TV segments on Comcast SportsNet. Additionally, live interviews with both the professional and amateur winners will be broadcast on KFBK 1530 am radio and KHTK 1140 am radio, with pictorial reviews appearing in Bass Angler’s Guide magazine.

To view the custom collector’s edition Harley and to learn more about West Coast Bass and its exciting concepts for 2010, visit www.westcoastbass.net.