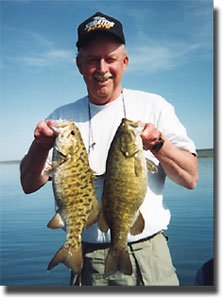 Fall, one of my favorite times of the year. The fall is what I refer to as Transition Time. Fishing here on the Columbia and Snake Rivers in Southeastern Washington this time of year can be incredible.  I caught my all time biggest Smallmouth on September 21, 2005 on the Columbia River above the town of Richland, WA.  That giant fish weighed 7 lbs 5 ozs and was 22.5 inches long with a 17 inch girth. The water temperature was 64.5 degrees and she was 14 ft deep.  I caught her on a lure that is named after me, called “OL Ugly”. It is a tube bait that mimics both the crawdads and some of the baitfish here on the Columbia River. Manufactured by Big Bite Bait Company and it has been one of my most successful lures.  The day I caught her, I had five Smallmouths’ on that bait that weighed a total of 22 lbs.  I only wish it was a tournament? But not this time!!!!

On October 10, 2003 a client caught a 7 lb 2 oz Smallmouth in the same general area using a Pop-R. Fighting a 7 lb smallie on 8 lb McCoy line and a light weight 664 Lamiglas spinning rod was exciting to say the least. He was elated and had never even seen a Smallmouth of that size let alone catch one.  After taking several pictures and getting all the measurements, he opted for the fish friendly method, releasing her and purchasing a fiberglass reproduction. I gently released her with a kiss, hoping to catch her again.  Hanging on the wall of his office is a fiberglass mount of that monster smallie that we will both remember for a lifetime.

The water starts to cool down in mid to late September causing the Smallmouth to feed up prior to the winter months. Smallmouth fishing here can be awesome usually all the way through October and sometimes even into late November, depending on the weather of course. The better the weather, the later in the year they bite. The average ambient temperature in September runs from 75-85 degrees and October temperatures range from 58-73 degrees. Then in November the temps really drop into the 45-58 degree range by the end of the month.  The water temperature will drop from the mid-sixties in late September to the mid and upper fifties by the middle of November. When the water temperature gets into the low fifties the bite slows dramatically.

The most productive areas during the transition are flats that have a sharp drop-off nearby and scattered rocks make them even better. These types of flats will hold fish that are active, roaming around looking for prey.  At this time of year, the river is absolutely full of Shad minnows which the Small mouth’s gorge on getting ready for the winter.  Another area that can be very productive is weed lines that have current. Shad minnows get pushed along these weeds lines giving the smallmouth and easy target.  The ends of islands are also very productive. At the end of each island the current breaks and slows allowing the Smallmouth to get out of the fast current and an opportunity to ambush the shad as they make their way down stream.

One of the most popular spots this time of year is the Yakima Delta; this is where the Yakima River enters the Columbia River. This Delta has an abundance of weed lines, drop-offs and scattered rocks, a perfect combination for big smallmouth.  In addition, this time of year the water clarity can be extremely clear. The Delta are is full of Shad and I’ve found the most productive bait to be a 5-inch Thug stick style bait (basskicknbaits.com) in a clear with silver flake color.  I tie it on using McCoy 30lb braid with about a three-foot leader of McCoy Clear 12 lb test using a Falcon hook size 3 with a 1/16 oz weight.  Using a (704) 7-foot Lamiglas spinning rod, cast it as far upstream as you can and just let it drift downstream reeling just fast enough to keep the slack line to minimum. Be sure to watch your line because you won’t feel the bite, your line just stops, jumps or twitches. I set the hook on any unnatural movement. Using the braided line (which does not stretch) helps me get a better hook set. This method can be productive but at the same time, you have to be patient because it is a big fish technique and you don’t get very many bites. However, the fish you do catch using this floating the stick bait are usually bigger and it is possible to catch the fish of a lifetime.

Another great area is the Columbia above the town of Richland. This area can produce five-fish limits that weigh 20 lbs or better during this time of year. Running up the river can be hazardous and many anglers have lost lower units in this area.  The river above Richland is narrow, rocky, shallow and swift.  If you haven’t navigated this stretch of river before, I would advise you to have someone who knows the river take you for the first time. Once you get their drifting the Thug or OL Ugly can also be productive in the current.

Remember to always wear your life jackets and be safe.

Bob Adkinson is a bass guide on the Columbia, Snake, and Yakima Rivers. He enjoys tournament fishing and is currently competing on the ABA, N.W. Bass, and the FLW Tournament trails. He is the past winner of 2003 ABA Classic and has fished the Western Division of B.A.S.S.