You are here: Home / Archives for new under water camera

Open Your Eyes and See…

A few years back I installed Power Poles thinking these are cool but now after using them I will never have a boat without them.

Underwater cameras have been around for a while now but it seems there’s a lot of bass anglers haven’t embraced them like the ice angler’s do and you might wonder do I need one or is it just a cool thing to have.

About 15 years ago I

purchased my first Aqua-Vu a somewhat cumbersome piece of equipment, it had a battery, case, monitor, camera and long cord. Equipped with a hood because the sunlight would washout the screen – it was like looking down a tube to the underwater world. Unless you had two people in the boat it was difficult to look down the tube and maneuver the boat at the same time. None the less it opened my eyes to a new world.

I remember fishing Frazier Point at Clear Lake in Calif and after fishing the entire point for 30 minutes or so without a bite I lowered the camera and to my surprise I saw a school of five-pound plus bass swimming around without a care. After seeing this I backed off and tried again to catch them, this time with confidence they are there but still no luck, however, I learned a valuable lesson.

These fish were there, they are living there it just wasn’t time for them to feed. Armed with this knowledge I’ve returned to the spot many times over the years and caught a number of great fish. If I didn’t lower the camera down I wouldn’t have known for sure those fish where there or had the confidence to fish it. 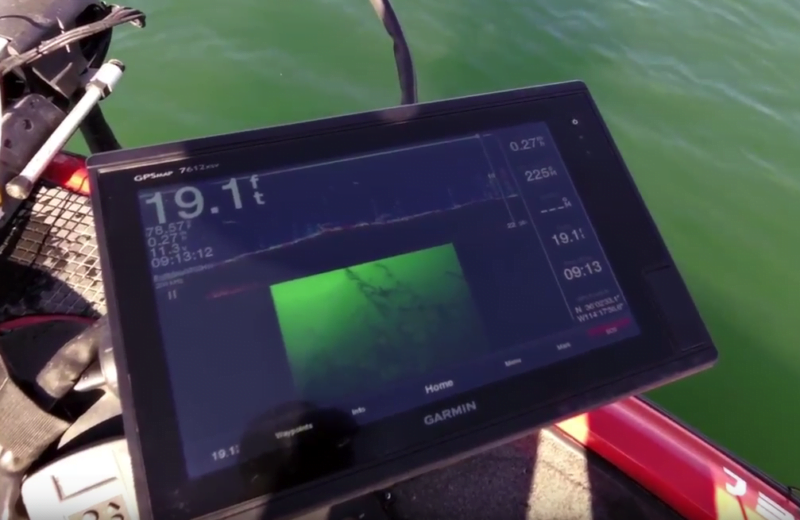 Move to present day, now my Aqua-Vu (AV Multi-Vu) is connected direct to my Garmin (7612) (12” graph), no more tilting the screen to get the right angle or looking down a tube, just flip a switch, lower the camera and get a look at what’s below. See the video how to hook up your Aqua-Vu

You’ll be amazed how different things look. For example, you might think you see a giant school of bait in 50ft of water just to find out its debris suspended in the thermocline or you’ll see fish only to find out they are carp and not bass. An underwater camera might sound like a fun toy but in reality it’s a valuable tool.

Lake Mead using my graph I could tell there was a good amount of grass located in 15 -20 ft. deep but it was hard to determine just what the grass looked like. Was it thick, sparse, it was difficult to tell how tall it was but after lowering the camera down I could tell the grass was between a one foot and two-foot-tall with areas where it was thick and others where it was sparse. Then once in 12 ft. or so there was no grass.

The bite was tough during this time and a finesse presentation was the best way to catch these bass’. So, with the knowledge of the grass height I adjusted my dropshot rig to about two ft. just above the grass height and fish in the 15 to 20ft range where the grass and the bass were which helped me land several fish that I would have passed up.

A killer new spot in the fall of 2016 I found an underwater car in the middle of a channel with grass growing around it, then mixed in were several large bass. Looking at the depth finder you couldn’t tell it was a car, it looked like a pile of grass that you would normally pass over.

In a marina, I dropped the camera and went to the middle of the bay where I found sparse thick weed patches in 12ft of water with good size bass on them.

Driving through Texas on our way to the B.A.S.S. Nationals we stopped at Lake Amistad. We launched and fished for an hour or so with no bites, wondering what things looked like we headed to the bridge – the best-looking bank around and lowered the camera.

With the camera, down in 15ft we noticed several smallmouth on the rocky bottom. Being the first time at Amistad we had no idea there were smallmouth. Now we had a clue and started drop shotting, catching several fish.

Heading to a cove we lowered the camera again and found weeds in 10ft of water with largemouth mixed in where we caught some slow rolling a spinnerbait and dragging a Senko. Again, the camera let us know the real scoop aiding in a few more bass.

January at lake Camanche we found feeding loners that otherwise would have gone unnoticed. Using the camera, we would go along the old mine tailings (river rock piles) and see a lone spotted bass, once we spotted a bass on the camera we could toss out and catch that bass. Without the camera, we had no idea if there was a school of bass with only on biting or what was actually going on. Armed with the info we knew to cover water locating those loner feeding fish and not camp out in a single spot.

The Aqua-Vu is one of those things you never knew you really needed until you used it.