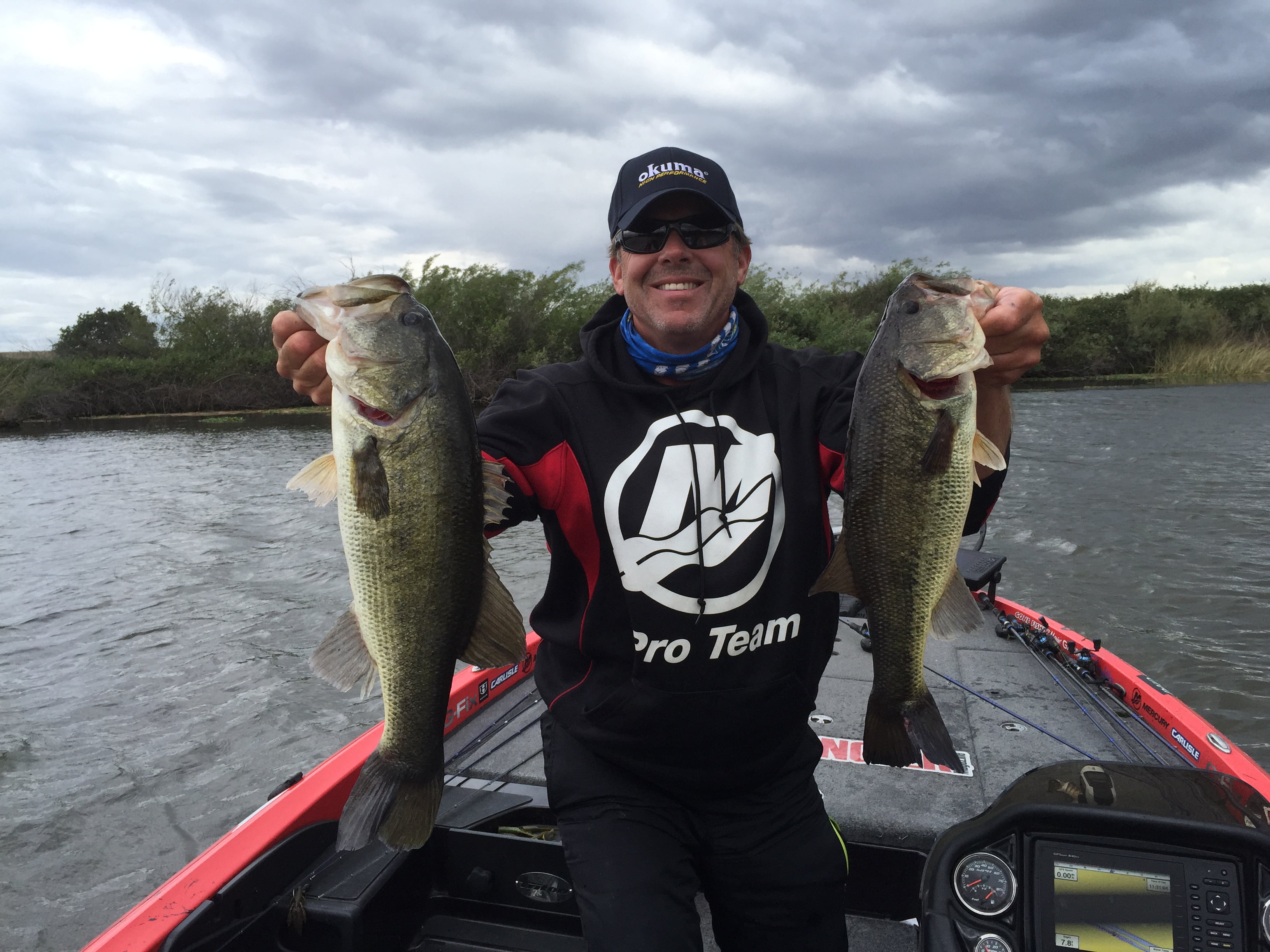 At the Bassmasters Classic many years ago, Guy Eaker was telling me about a small plate he put in front of his worm to make it shake back and forth (the Eaker Shaker). The bait looked great in the demo tank, but to me it was just another lure. Guy was telling me about all the big fish he had caught on it. But if you’re around anglers and sports shows, you see it all and get calloused to many of the new things. It is just another lure, right? Now I wish I’d done more experimenting.

Fast forward a few years, Alton Jones (Classic Champion) told me how he had won a lot of money recently by swimming a jig and that I needed to try it out in the west. Put these two baits together and what do you get?

Several years ago, I was struggling just to get a bite, so I got on the horn and called Randy Pringle. He is “The Fishing Instructor” as well as a long-time friend and Delta guide. Randy tells me he is catching huge bags of fish on a Strike King Pure Poison (similar to a Chatterbait). Later, I saw Randy on the water and he was nice enough to give me a few of these new baits.

My skeptical side was thinking … just another bait, right? But I’ll give it a try and see what happens. After fishing for about an hour with no bites, I started to lose any confidence that I may have had, when suddenly a ten-pound bass crushed the bait right at the boat. Wow, that was cool… but was it was right at the boat? Maybe it was a fluke? So on down the bank I went and I get a five-pounder… cool, then another five-plus and a few more nice fish. I was by myself and had caught a five fish limit weighing close to 30 pounds.

I was thinking this really is a great bait. The day was not done yet. I decided to try a dead-end slough where the water warms first. While I’m going down the bank repetitively casting the lure just inches from the rip rap; I get a bite and the fish heads instantly for deep water. I thought this must be a Striper it’s too big to be a black bass and with those thoughts I horsed the fish to the boat get it up alongside the boat “Oh My God” it’s a giant bass, it could have eaten those five-pounders I had caught earlier. After a few minutes that seemed like hours, I lipped this monster into the boat. No scale, no camera. I’d really feel bad if it died, so I let her go right away. It’s the biggest bass I ever caught, but without a scale I estimate it was between twelve and fifteen pounds. Ok now we’re looking at a 40-pound bag for the day, talk about gaining confidence in a lure.

By the end of the spring, I had this bait down and even weighed 60 pounds in the FLW Stren, a three-day event using the bait. I lost three big fish during that event or I would have had much more. We saw Bret Hite win back-to-back FLW events with this bait and on the California Delta, where he caught well over 25 pounds a day. Over the last few years, this bait has taken off with many stories similar to mine. We come to find out this is not just another bait but a combination of baits that really work.

The Chatterbait was originally brought to market by ZMAN and they hold the registered patent on the product. Since ZMAN marketed the Chatterbait, several companies have produced similar baits with some differences. You can purchase the blades and jigs and assemble them yourself. I’ve used a number of these style baits, including the original.

The concept is for the chatterbait blade to shake violently back and forth, pushing water from one side to the other. This action creates a vibration and an erratic action like no other bait on the market. After using several brands, I’ve noticed they have distinct vibrations like different crank baits vibrate differently. Over the last few years I have discovered the baits with the most action produce the more strikes when the bite is good and ones that vibrate less are better dung a tough bite.

Two baits I use most often are the Z Man Jack Hammer and the Strike King Thunder Cricket. The Revenge has a hunting action that thrashes side to side, attracting good quality bites. The Z-Man has a more subtle action better for working the bait slow.

This bait is very versatile. It fishes most anywhere a crank bait or spinner bait can go even with an open hook (no weed guard) and it is very snag resistant. Though you can fish them without a trailer they are more effective with a trailer. The baits usually come with a small split tail trailer that works fine. But, anglers have discovered that adding a different trailer and changing the look of the bait can have very productive results.

You can add almost any worm or soft plastic bait you want to the back. My favorite is a Yamamoto Zako and some good choices are: Swimming Senko, Zoom Ultra Vibe speed worm, Berkley power worms, Zoom Flukes, Basstrix hollow body swimbaits and a host of other baits. A raw type trailer will work as well especially if you’re working the bait super slow. I have found the trailer size directly affects the size of the fish you will catch. Using the small trailer that comes with the bait will yield more bass but larger trailers trigger fewer bites but better sized fish. Before the Zako came out, my #1 choice of trailer is a 5.5”Swimming Senko and on a recent trip my partner commented that’s as big as a swimbait. Using the Swimming Senko (full size) makes the bait about 8 inches long. With this combination, my average bass has been about four pounds. Just like using swimbaits, starting out, you may want to downsize in order to gain confidence in the bait. Like everything else in bass fishing, experimenting is the key to finding success.

Chatterbaits and similar lures come in an array of colors and variations of colors. Just like a crankbait or spinnerbait you will have your favorites. The season will also dictate what colors work best. In the spring, bass are feeding mainly on crawfish, indicating dark colors like browns, reds, greens and blacks to be likely as the best choices. Moving into the summer bass are eating their fry, bluegill, crappie, brim, catfish as well as other small baitfish, so the lighter colors with lighter green highlights and chartreuse colors work well. In the fall bass feed on shad and other small bait fish making whites and shad colors the dominant colors. These color choices are only a general suggestion, since I have found all colors to work in each season. Again, experimenting will help you figure out what works best on your lake.

Chatterbaits have a single hook, which means you can put more pressure on the fish without it coming unbuttoned. My favorite rod for throwing a chatter bait on the Cal Delta and Clear Lake is the Okuma TCS-C-731 7’3” heavy. On lakes where there’s not as much cover I use my Okuma 7’ TCS –C-701MH medium heavy. You want your rod to have a medium light tip so you can accurately cast the bait and then a good solid lock-up point. (Lock-up point is where the rod is very difficult to bend, the hook setting point) Unless you’re fishing open clear water you’ll need a stout rod that can drive a hook home as well as a rod you can wrestle a big fish out of heavy cover. Matched for the Okuma rod is the Okuma reel – I prefer a fast retrieve, so the 7.3:1 or 8.0:1 are my choices. Light line is unnecessary, 15lb line is the minimum I use and most times 20lb is preferred. I’ve found fluorocarbon works very well with its low stretch, great abrasion resistance plus the stuff just doesn’t break. To catch bass on this bait you need to throw into the cover and to get them out you’ll need a good line, don’t skimp here. Strong monofilament will also work fine too.

By now we should have the basics of rod, line and a few trailers covered, so we’re ready to fish. With any lure there is a cadence that works best. The cadence changes day to day depending on the mood of the bass so keep changing the retrieval speed until the fish start to bite. I’ve found a slow retrieval is the secret to this bait 90% of the time. A person fishing this bait slowly will entice more bass than the guy mindlessly chucking and winding. Work the bait in the weeds, through the wood, bounce it off the rocks, but make sure you put it where the bass are. Bass are structure oriented ambush predators, so don’t be afraid of tossing the bait into complex structure where you might not get it back. If you don’t throw the lure where the fish are you could miss the opportunity to catch the biggest bass of your life.

This is the time of year to catch some giant bass on the Chatterbait, go get a few and see how they work for you. Over the last few years I’ve had so many big fish on the chatter bait is always tied on.

If you like this article, pick up a copy of Bass Angler Magazine and many more on bass fishing.